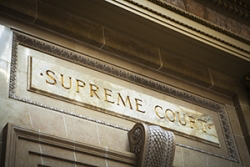 eSPARC NOTES: On June 29, the Supreme Court held that the EPA must consider costs when deciding to regulate existing electrical utility steam generating units (EGUs) for hazardous air emissions. The case before the court arose from the EPA’s 2012 Mercury and Air Toxic rule, in which the agency openly omitted costs from its decision to relist EGUs as a regulated source of mercury, and instead reserved cost considerations for determining the control technology to be installed. While the Court determined the EPA’s process was impermissible, they did not strike down the rule, leaving it to the D.C. Circuit Court to decide if the rule will stay in place while the EPA revisits its listing analysis. Practically, even if the D.C. Circuit strikes down the rule, the impact on the industry has already been felt as the vast majority of EGUs have either installed the prescribed technology, shut down, or transitioned to natural gas.

In a 5-4 decision Monday, the Supreme Court ruled that the EPA essentially jumped the gun in its attempt to set mercury standards for EGUs by failing to consider costs when it decided to re-list fossil fuel plants as a regulated source of mercury in 2012. Under the Clean Air Act, the EPA must follow a two-step process in regulating EGUs for emissions of hazardous air pollutants (HAPs): (1) the agency needs to determine whether it is both appropriate and necessary to regulate the facilities’ emissions for a particular HAP, and (2) if it does find that regulation of EGUs is appropriate and necessary, the EPA must determine the technology standard that will achieve “the maximum degree of reduction in emissions … that the Administrator, taking into consideration the cost of achieving such emission reduction … determines is achievable for new and existing sources.” This standard, called the Maximum Achievable Control Technology, or MACT, is what the EPA used in determining the Mercury and Air Toxic Standards for coal- and oil-fired EGUs in February of 2012. While the EPA took costs into account when developing the MACT, it declined to consider costs when it determined that regulating EGUs would be appropriate and necessary in the first place.

The EPA’s process of considering the costs only in step 2 of its mercury regulation was contested by several state and industry groups. They alleged that by considering costs so late in the process, the EPA could trigger mandatory technology controls before determining whether there was any economically viable controls available. In a narrowly tailored opinion by Justice Antonin Scalia, the Supreme Court agreed with the challengers and found that costs must be considered at the outset when determining the appropriateness of regulating EGUs for any hazardous air pollutants. The Court’s decision did not strike down the 2012 mercury rule, but instead remanded the case back to the D.C. Circuit Court to determine the rule’s fate while the EPA revises its “appropriate and necessary” finding.

To the extent the opinion reaches beyond the source listing process at issue, the majority reinforced that costs should, to some extent, be included in any reasonable use of regulatory discretion, absent precluding statutory language. It also keeps alive certain industry arguments against the agency’s forthcoming Clean Power Plan rule, namely that one reading of the Clean Air Act would prohibit sources which are regulated for HAPs (i.e. power plants with mercurey) from also being regulated for non-hazardous emissions, like CO2e. As this argument bares a low likelihood of success, and given the noticeable restraint exercised by the conservative majority in addressing only the language at issue rather than invoking the more broad sweeping limitations on agency deference as set forth in Justice Clarence Thomas’ concurring opinion, the ruling will likely have a negligible impact on the impending challenges to the Clean Power Plan. It will, similarly, have a minimal impact on the operation of coal- and oil-fired plants as the rule went into effect in April and the majority of plant operators had decided whether to invest in the prescribed technology or to retire particular units prior to the Court’s decision.