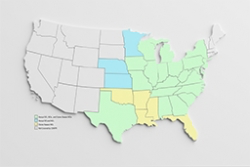 The Cross State Air Pollution Rule (“CSAPR”) has once again survived a legal challenge.  However, unlike the 2014 Supreme Court ruling, the latest court decision will require a major restructuring of how the rule is implemented. On July 28, the D.C. Circuit Court found that the EPA was too heavy-handed in setting its SO2 and ozone-season NOx budgets for several states and is requiring the agency to reevaluate its standards so as to prevent unnecessary emission restrictions. The issue before the court was whether the uniform reduction standards the agency utilized in CSAPR resulted in impermissible over-control of certain upwind states.

The CSAPR was originally intended to reduce SO2 and NOx emissions from states that were found to “significantly contribute” to a nonattainment zone located in another state. To reduce these emissions, the EPA applied a market-based approach, capping each state’s mass emissions of NOx and SO2. For NOx, all states found to contribute ambient impacts to downwind nonattainment areas were capped based on the use of technology that reduces emissions at a cost of up to $500/ton. For SO2, contributing states were placed in one of two groups based on their downwind impacts. For states with relatively low contributions to downwind nonattainment, such as Texas, Georgia, and Kansas, their control technology standard was set at $500/ton. For states with a greater impact, the threshold was set at $2,300/ton. By creating uniform technology control standards, emission allowances could be traded and transferred within each group to achieve the net reduction in target emissions.

While this approach may be ideal for creating larger trading markets, the D.C. Circuit found that such uniformity was contrary to the Supreme Court’s earlier decision concerning CSAPR, as it required some states to cut emissions above and beyond what was necessary to eliminate the amount they contributed to out of state nonattainment areas. For instance, under the EPA’s uniform standard approach, Texas was required to cut its SO2 emissions in accordance with the $500/ton technology standard despite the fact that the EPA’s own technical guidance found that Texas could adequately eliminate its impact with just a $100/ton technology standard.  After reviewing the EPA’s 2012 technical support documents and the EPA’s method in applying the rule to each state, the Court invalidated the 2014 SO2 emissions budgets for Alabama, Georgia, South Carolina, and Texas, and the 2014 ozone-season NOx budgets for Florida, Maryland, New Jersey, New York, North Carolina, Ohio, Pennsylvania, South Carolina, Texas, Virginia, and West Virginia.

The Court did not, however, provide any immediate relief from CSAPR requirements. Instead, the Court ordered that the rule to remain in place as written until the agency has reevaluated its approach. The Court’s decision in this respect is partly due to the Supreme Court previously stating that any adjustment to how emissions were distributed would not justify wholesale invalidation of the rule.  It also reflects the impacts these changes will have on the CSPAR allowance markets and other state emissions. The impact of the ruling is not limited to the aforementioned states as a move away from uniform standards puts the emission trading mechanism at the heart of CSAPR in question. Possibly as a result of this impact, the Court held that all affected states must still comply with the CSAPR requirements until the EPA has reevaluated and, as necessary, revised each affected state’s budget.

Although the Court warned the EPA against dragging their feet, the agency’s reevaluation of emission standards will likely take a significant amount time. Such reevaluation will incorporate supplemental data and calculations, which may alter the decision regarding which states may be relieved from their current emission budgets and the extent of such relief. Finally, the EPA may appeal the D.C. Circuit’s finding to the Supreme Court, asserting that, while not precisely fitted to each state, the uniform standards were tailored narrowly enough so as to provide the agency leeway in their approach.